HOME > NEWS > MALAYSIA > CDF: The Best Way to Predict Your Future is to Create it!

Have you been to any career fair before in your life? I bet most of you did at least once. Usually in a career fair, employers, recruiters, and schools give information on their company to potential employees. Well that is exactly what I thought when I first heard of Career Discovery Forum 2018 from my colleagues. But that is not the case!

Last Saturday (30th July), I had been given the opportunity to participate and help in organizing the Career Discovery Forum 2018 (CDF) hosted by Leave a Nest. Took place in the National Museum of Emerging Science and Innovation, Miraikan, CDF offers a unique opportunity for its participants; which not only focusing on students, but also researchers and engineers. The forum consists of sharing workshops by professionals and Open Booth Session by companies. All of these contents serve as a platform for participants to learn and to share their opinions with the companies.

Actually, the sessions were in Japanese but with the help of my friends, I managed to join the opening pitch and a workshop for education session. Both of the sessions were actually very casual and motivating but still packed with information that focuses on helping participants to create their future career paths.

This year, CDF had taken a leap forward by opening English sessions called World Forum which targeted on International students and researchers in Japan. The first slot, called World Session, started at 3 p.m. with the title of “Ask Sempai: What is it like to work in Japan?”. It was a casual sharing session by four experienced guest speakers, Mr. Develik Bogac from KOBASHI INDUSTRIES CO., LTD., Ms. Iara Barros from DG TAKANO Co., Ltd., Dr. Nicolas Denis from Challenergy Inc. and Dr. ElHassan ElSabry from Hitotsubashi University. They shared their opinions and experience on three top questions asked by international students related to working with Japanese companies.

All the guest speakers were very friendly and open minded. After listening to the speaker's sharing, I could say that the session managed to change my perspective on applying job for Japanese company. One of the interesting response from the speakers that attracted me was that Japanese companies are now slowly moving towards globalizing and being open about working environment by increasing english proficiency in workplace and receiving more female workers. From my point of view, I can see what they said is true based on my current experience of doing internship in Leave a Nest. Most of my colleagues have good command of English and almost half of them are females.

The unique thing about CDF is that it provides the opportunity for both participants and companies to have engaging discussions in the Open Booth Session. Each booth had different topics that is related to the company's objective for future project and each participant had the chance to visit three booths. Since I was assigned to be the time keeper for this session, I got to mingle around the booths and observe the discussions. The discussions were actually very interesting since each of it was participated by three different groups of people which were professionals from the company’s side, researchers, and also undergraduate students from different backgrounds. This leads to change of different and new kinds of ideas between them. 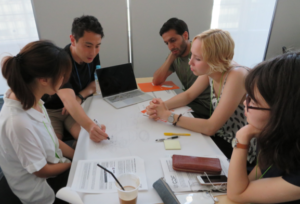 The discussion group which attracted me the most was the one participated by environmental engineering researchers, mechanical engineering undergraduate student, and also agriculture developments researchers. Together, they discussed on the ideas of new potential fields that could be worked by the company to cultivate the earth such as artificial intelligence, IT and drones. On the other hand, the company also gave them inputs on the project and products that they worked on which related to the participants fields. Since I’m an undergraduate student, I think that this session gave me an overview on what I need to do to prepare for my future career by seeing how vast the knowledge of others is and how convincing they were when presenting their ideas.

After the closing ceremony, I got to socialize with the participants and the representative from the companies in the Mixer session, which I think was actually a good opportunity to expand my networks. Not only that, the organizer was so understanding by arranging a halal corner for the participants. A few researchers that I met also said that they really enjoyed the session and manage to get new ideas and views for their future research. Overall it was a great new experience for me to be interacting with foreign researchers, have casual interactions with Japanese companies, and gain new knowledge on career opportunity and development. And due to that, I really encourage all of you to look forward on joining the next Career Discovery Forum!