March 11th, 2011 was one of the darkest days in the history of Japan. The Great East Japan Earthquake triggered powerful tsunami waves that reached heights of up to 40.5 meters and caused nuclear accidents at three reactors in the Fukushima Daiichi Nuclear Power Plant complex. “I’ve always believed that nuclear power was the right answer to solving the energy problem our world is facing with increased carbon emissions. But after the quake, my views changed.” Atsushi Shimizu was in Osaka watching the horrific news unfold on television. He came to the realization that there just had to be a better way to utilize our natural resources and generate electricity for the people. “Such nuclear accidents should never be allowed to happen again”, he says with determination. 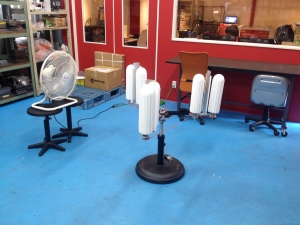 Many companies over the world are inventing technologies that enable us to use wind power as a viable alternative to fossil fuels. One such innovation is a wind turbine which rotates using spiral cylinders and the “magnus effect”- an effect which produces a force on a spinning object, making it curve. The cylinders utilize this principle and as a result spin with increased aerodynamic force on encountering wind. Magnus turbines therefore have a higher power generation capacity than propeller-blade turbines along with being much safer as well. Another recent creation is the vertical axis wind turbine (VAWT). Conventional wind turbines have always spun on a horizontal axis but the VAWT is a quieter, more practical alternative as it requires less wind to generate power and does not need to be pointed into the wind direction.  Keeping all this in mind, Atsushi had an epiphany. Why not combine the Magnus effect with the concept of a vertical axis wind turbine? This would make it possible to include the advantages of both principles in one package and thereby maximize efficiency of utilizing wind power as an electricity source. Therefore, he designed a VAWT which uses the Magnus effect to spin – something which has never been done before.

Platform that triggered the ‘maker’ spirit

“After perfecting my idea, I immediately quit my job and decided to move from Osaka to Tokyo where all the action was. However, I got rejected from many business competitions because they said my product was not yet marketable on a large scale as compared to other IT ideas. I kept looking and waiting for a business plan competition or event which targeted mainly makers and inventors and that’s when I found Tech Plan Grand Prix organised by Leave a Nest Co., Ltd in Tokyo. It turned out to be exactly what I was looking for”. Following his participation, Atsushi Shimizu emerged the winner of Japan’s first Tech Plan Grand Prix in March 2013. Supplying electricity to rural parts of India  In October of 2014, under the support from Tech Planter Scheme he then successfully set up his own company. Currently, he is collaborating with a maker’s factory called “Garage Sumida” in Tokyo which provides specialists to mass produce technology. As he has just started out on his journey, it will take him lots of hard work and perseverance to reach the goal. Nevertheless, his passion of wanting to contribute to the society is a major factor which keeps him going every single day. “I really want to bring the VAWT to developing countries where many people suffer without power. In India for example, 52 percentage of the population live without electricity. I would like to set up my turbines in rural villages, on the roofs of people’s houses. This will allow them to be self-sufficient in power generation and will lead to better lives. My dream is that the safer, more economical VAWT I invented is used all over the world, ultimately replacing the use of propeller turbines”.

Message for Maker’s around the world

“Japan has always been encouraging hardware innovations. Her strength lies there. Foreign makers would also definitely be welcomed in Japan. There are good opportunities available here especially for any entrepreneurs who want to focus on making something serious”.

TECH PLAN DEMO DAY in VIETNAM 2020 Will Be Happening on This Saturday Online!

Congratulations to Winners of TECH PLAN DEMO DAY in MALAYSIA 2020!

TECH PLAN DEMO DAY in MALAYSIA 2020 is Happening This Weekend

TECH PLAN DEMO DAY in THAILAND 2020 Will Be Happening on This Saturday Online!

The First Online TECH PLAN DEMO DAY in INDONESIA 2020 Will Be Happening on This Weekend!